skip to main | skip to sidebar

I can't remember where I read this, but now that VoIP is a pretty common technology offering and that more and more of the common man is aware of what it is and what it does, it's fair that new terms are coming to the forefront...
Nothing really new here as far as content, these security issues have been discussed before, what's new is the "catchy" terms themselves.
Posted by Tom at 10:05 PM No comments:

Catching the listener feedback for Technorama show 170, timezones and watches, well – it made me think about Richard Sears, who founded, with Alvah Roebuck, the whole Sears, Roebuck & Company mail order catalog industry.

Richard Sears was a station agent for the Railroad that ran through North Redwood,

MN, not far from where I grew up. In the 1880’s, when he was in his 20’s, he was intrigued with the idea of products manufactured in one part of the country and sold (and delivered) to people in another part of the country. After all, his job as a station agent was somewhat in a value chain similar to this, in that farmers brought their grain to the railroad (no elevator companies existed right next to the railroad at that time; the grainery elevator's eventual purpose was to “cache” the grain for bulk transport at a later time). Among other things, Sears helped to get that grain shipped by rail to the mill, where it was processed into other grain products, like flour and cereals.

Many give him credit for observing other products being shipped via rail, through his station, and him getting the idea that if people could look at a product on a piece of paper, order it, have it delivered to them, well then such a company could revolutionize commerce. While this is somewhat true in hindsight, my father, who also was a small businessman in , often talked about stories his grandmother had talked about when Richard Sears was doing his “thing” a few miles to the north of where I grew up.

Farmers had to get their harvested grain to the railroad, where someone loaded it onto a railroad car, and off it went. Railroads ran on a schedule, farmers ran by the sun, and as this was before cars/trucks; grain arrived via horse drawn cart. Sears had seen companies that were trying to sell pocket watches to the stores along the railway line, but the problem he was trying to solve was making sure the farmers got their grain to the railroad station on time. These watches were the answer, but he couldn’t afford any inventory, no money… so he got this idea of putting pictures of watches, along with a marked up price, in a loose leaf sort of book, which he planned to show to the farmers when they came to the station.

About this same time, a wholesaler had shipped an un-ordered consignment of pocket watches to a local retailer. This was a common practice at the time; wholesalers would then “offer” to sell the goods to a local retailer at a lower price, rather than have the goods shipped back. In this particular case, the retailer refused the entire consignment of pocket watches and Sears stepped in, offering to sell the watches for the wholesaler, but without having to pay for the consignment up-front.

Since he was a railroad station agent and when all the watches were sold, the farmers would look at his pictures of watches, trust him with taking an order, give him the money for the pocket watch, which he, in turn, used to purchase the watches, which were delivered by the railroad to him, and he delivered to the farmer.

He pocketed a profit of about $5,000 (good money at the time) from this consignment business and had these “orders” for more. Eventually, he moved to to start his company, which initially was putting advertisements in farm publications and ultimately developed a standalone publication, the Sears, Roebuck & Company catalog itself.

During this time, merchandising transactions in the were very risky (think unscrupulous sellers trying to fleece prospective buyers, ala the eBay issue of today). Bartering was the normal transaction and banks were just starting to come to rural parts of the country to handle larger money transaction exchanges (as escrow services do today).

I think that because of his railroad association, the “Eureka moment” of acting as the middle man between the watch maker and the farmer, and solving a common problem between the railroad and the farmer, this was the impetus for the mail order business becoming launched, indeed almost all commerce where money changes hands first, and goods later. The “deferred transaction” in commerce, where there is a time delay between money and merchandise changing hands, I believe started with Sears. (Of course, the refused consignment and his success at selling those pocket watches first, helped greatly because it gave him a financial "seed".) I have never heard of an earlier example of the deferred transaction model, and I have looked. As you probably know, Sears, Roebuck & Company eventually sold just about everything, including houses.

The famous Sears guarantee and a Cash-On-Delivery option helped to sway those who might be suspicious of unscrupulous merchants. Reputation still counts, after all… Indeed, Sears hired Roebuck at the very beginning in order to repair watches (so the guarantee could be met). Roebuck, of course, later became one of the company founders.

And all this from watches, being on-time, and the railroad.

Those who have ears - ABC Radio National

So much about science and nature (including the nature of us) is misunderstood. This was a refreshing program outlining work being done in this area.

Brisbane educator Jennifer Riggs discusses children who have serious problems with auditory processing. Studies have shown that a third of us are strongly visual-spatial learners and many children cannot learn through being talked at, but will learn better by seeing and doing. The fundamentals of learning are the five senses, but how many of them do we use in teaching?

Download audio
Posted by Tom at 4:29 PM No comments: 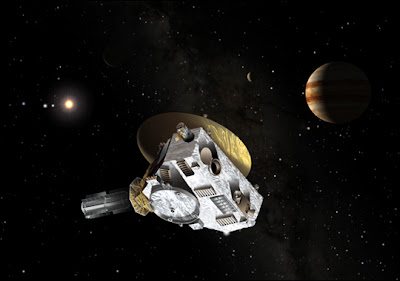 I found the artwork of the spacecraft itself by Mike Derer.

I wrote about the subject matter I was disappointed in back in September, 2006 (here and here) when the whole Pluto is a planet or not stuff was going on. Journalism has a duty to inform the public, but when poor diagrams are utilized, the facts are misinterpreted.

New Horizons lifted off on 1/19/2006 and after a little more than a year, just had a Jupiter flyby in order to gain a speed boost, but trading the increase in speed for a little loss of Jupiter's rotational momentum. It's speed after launch was 16.21 km/s (36,260 mph) making it the fastest spacecraft so far, but as it approached Jupiter at 23 km/s (51,449 mph) relative to the sun. After the Jupiter flyby, on 2/28/2007, the gravity assist increased the spacecraft's speed by nearly 4 km/s (8,947 mph).

Even with the increase in speed, New Horizons will not get to the Pluto flyby until 7/14/2015, a little more than 8 years from now. The program mentioned this, but only stating these facts in passing, sort of letting the viewer figure it out. In fact, the pictures they showed were very similar to the inaccurate ones you used to see in text books, or similar to the planet models your kids make in school. Gee, it must be pretty big distances involved out there...

Well, as a matter of fact, yes they are very big distances... So here was an opportunity to inform the public, be a little more descriptive with the facts, but they didn't quite put the facts out there in the right manner.
Posted by Tom at 10:03 PM 1 comment:

On Monday, the Supreme Court handed down a ruling in KSR vs. Teleflex, finding that the "combination of two commonly known elements into something obvious" is not patentable. While on it's surface this is a good thing, eliminating lots of expense in litigating bogus patents or patents that do not really enhance, as might be expected the next piece of news was:

From FierceVOIP: Vonage has seized on the ruling, asking an appellate court to throw out the verdict against it and order a new trial. Verizon, of course, is opposed. Vonage is already appealing its loss at trial; the appellate court has set a June 25 hearing on that appeal. Vonage wants the appeal to be put on hold pending the results of the new trial. If it loses that second trial, Vonage wants the existing appeals process to resume. Even though Vonage was convicted of infringing three patents, the courts are letting the company operate pretty much as normal while the appeals are being heard.

I need a playbook.

Tom
I have been fortunate to have developed a Product Marketing and Program Management Executive level career from a robust Technology background in the Mobile, Telco, Commercial and Education space. My reputation for successful market launches and saving troubled projects in the global wireless, Tier 1 Carrier space covers VoIP/IMS application, high transaction and the ASP marketplace. This material is released under a Creative Commons License. See http://creativecommons.org/licenses/by-nc-sa/2.5/

What I am currently reading: